If you have played Brawl Stars, you know how important the Brawlers are.

From the makers of Clash of Clans, Brawl Stars is the ultimate MOBA. Irrespective of whether you are looking to complete quests, soar through the leaderboards, or collect gems, having the right Brawler by your side can make all the difference.

With more than 50 brawlers to choose from, picking the right one can be quite an arduous task!

Today, you will know more about the best brawlers to use in Brawl Stars. What’s more, we will also tell you which Brawler is at the top of the pack when it comes to situational challenges.

So, without further ado, let’s get started!

After digging deep into what every Brawler has to offer, we made a list featuring the cream of the crop. Take a look: 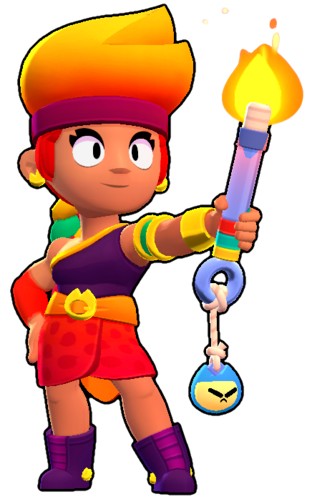 Categorized as Legendary, Amber has quickly cemented her position as one of the best Brawlers in the game. Due to her versatility, she is the go-to Brawler for all situations.

Amber is a Firebreather with the potential to cause a lot of damage. Her attacks can cover a vast range. Add to this mix her gadgets. You’ve got yourself a reliable warrior.

Her signature Dragon’s Breath attack involves the shooting of scorching flames with a long reach. If this wasn’t damaging enough, Amber has more. Her Super, Torch ‘Em, is a flask of fire fluid that she can throw across walls to create some serious damage.

Rounding up Amber’s arsenal are her star powers and gadgets. While Wild Flames and Scorchin’ Siphon enhance her performance, the Fire Starters gadget gives her the ability to run super-fast, leaving behind a trail of dangerous liquid fire.

You will find that Amber is well-suited for Heist. 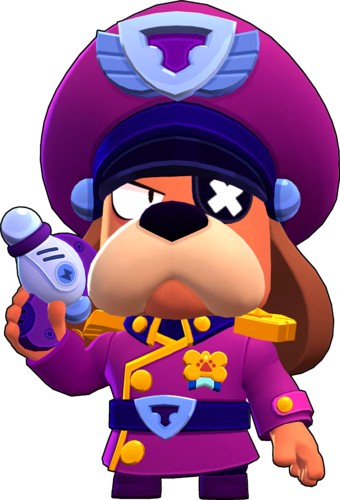 Colonel Ruffs is a solid Chromatic Brawler, despite his poor health level. Also, players will have to reach Tier 30 in Season 5 Brawl Pass to unlock him. But he’s worth the wait.

Colonel Ruffs’ long-range attacking abilities are complemented by lightning-quick reload reflexes. His Double-Barrel Laser Attack is an absolute beauty, where he can fire two lasers parallel to each other simultaneously.

His Super is Supply Drop, and it’s quite dramatic in the truest sense of the term. Picture this. Colonel Ruff throws his beacon, and the unsuspecting enemies are besieged by a supply drop they were totally unprepared for.

By using a Supply Drop, you get rewarded with small, collectible badges. These badges are effective in increasing health and damage intensity.

Colonel Ruffs’ star powers are Air Superiority and Field Promotion, making him a reliable guardian of allied brawlers. He has two gadgets: Take Cover and Air Support. Both these gadgets can inflict serious damage when used.

Due to his impressive skill-set, Colonel Ruffs is a brawler you can trust for events like Brawl Ball, Heist, and Duo Showdown. Provide Colonel Ruffs with a set of allies, and watch him do what he does best! 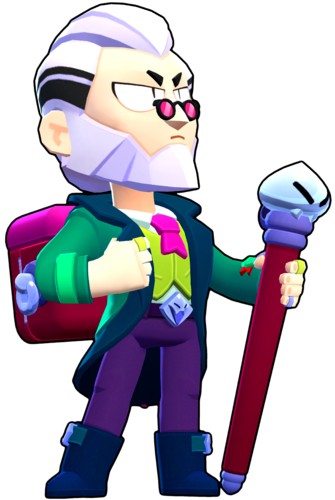 A Mythic Brawler, Byron is the very definition of sinister. However, look beyond the exterior, and you’ll see that he possesses a set of quirky and useful skills. Let’s see what they are.

With an attack aptly named Careful Dose, Byron can multitask like crazy. The fired dart can cause three-fold damage to enemies. If the dart hits any allies, no problem! They will be healed.

Along similar lines, Byron’s Super, known as Full Treatment, comprises throwable vials. When the vial is thrown, it can heal his allies while causing potent damage to his enemies. Now, you’re thinking: Who protects the protector?

That’s where his gadget, Shot In The Arm, becomes relevant. As the name indicates, this gadget replenishes Byron with 800 health per second. Byron’s star powers are Malaise and Injection. And, Malaise is one uber-cool Star Power.

With Malaise, Byron can ensure that the enemies receive 75% less healing, irrespective of their health source.

Byron is a great team Brawler. So, it would be a powerful move to make the most of him in team challenges and battles. 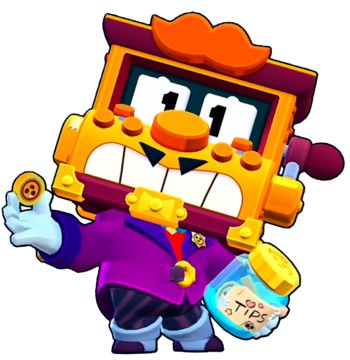 Don’t underestimate Griff. There’s more to the owner of Starr Park’s gift shop than what meets the eye. With his skills, he’s a Brawler who can pack quite the punch.

There are three elements to Griff’s Coin Toss Attack: cone formation, three waves, and three coins per wave. Together, the elements have the potential to inflict serious damage to the enemy. The Coin Toss Attack is perfect for a close-range ambush.

Moving on, Griff’s Super merits a special mention. Known as Cashback, this move involves Griff’s throw of five banknotes. These notes spin, swivel and serve- while causing damage in style. What’s more, the banknotes can clear obstacles with ease.

If you’re looking for something more intense, Griff has a gadget you can use. Make him drop Piggy Banks, and watch them explode!

His Star Power, Keep The Change, is perfect for slowing down the enemy camp’s attacks. You can use Griff in situations like Hot Zone, Gem Grab, and Siege. 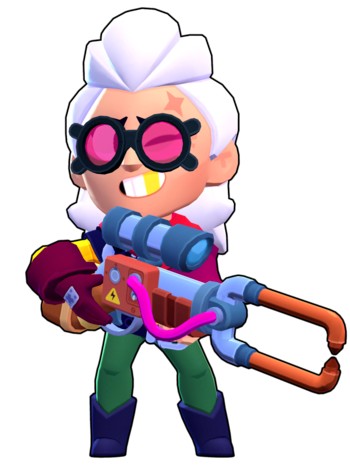 Belle is the second Chromatic Brawler on our list. Like Colonel Ruffs, you’ll have to wait a bit to unlock her. She comes as a reward at Tier 30 in Season 6. With a very long attack range, Belle is a very useful Brawler.

Belle’s attack is Shocker, and you’ll be amazed to learn what it can do. Not only can the bolt instantly demolish the person or object it comes in contact with, but it can also rebound and jump over to the next targets. By doing so, the bolt reduces them to dust as well.

Spotter, Belle’s Super, has a mechanism very similar to Shocker. Now, does Belle have any gadgets? Yes, she does!

Her Nest Egg is an invisible trap that can cause damage to the person who walks into it. Due to the gadget’s power, anyone within a 3-tile radius of the Nest Egg can also be a victim of the trap.

Belle’s Positive Feedback Superpower is a smart one. For every enemy she takes down, her shield protection increases. Her Grounded Superpower can flatten the enemies and keep them down for some time.

Belle’s ammunition is tailored for special events. You can also use her in places like Hot Maze and Acid Lakes. 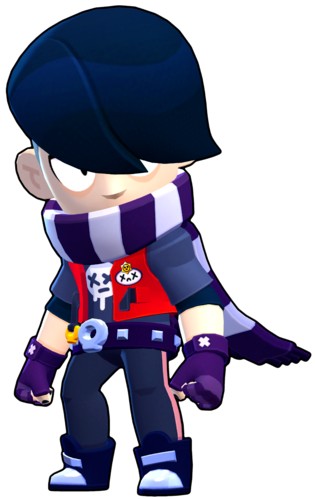 The short-tempered Brawler with the ‘look,’ Edgar’s rarity is at the Epic level. And, he’s classed as an assassin. With a movement speed that becomes astronomical when paired with Super, Edgar impresses on many levels.

His Super comes with self-charging abilities, giving him an edge that few other Brawlers have. Edgar’s on-the-target, piercing, and damaging scarf punches are what make up his attack, Fight Club.

Edgar can soar through obstacles on the might of his Super, Vault. This allows him to reach enemies with lightning-quick speed and catch them unawares. The best part is that Edgar is safe from all damages during Vault.

His Hardcore Gadget acts as a protective shield. Edgar’s Hard Landing power can cause damage to his enemies, while the Fisticuffs enhance his healing for every punch he delivers.

Due to his multifaceted abilities, Edgar is a sensible Brawler to use in Brawl Ball, Trophy Thieves, and other situations that rely on brute speed. 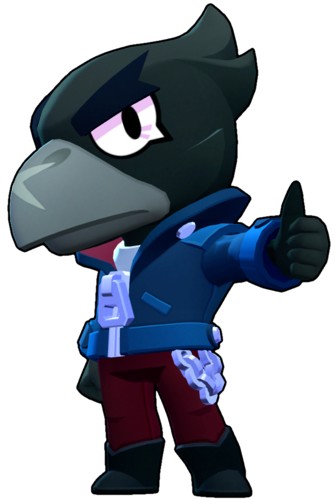 How about a Legendary Assassin? Crow is all about stealth and style. In his switchblade attack, Crow can ambush his enemies with three daggers. Not only do these daggers cause insane damage, but they also inject poison into the enemies’ systems.

Crow’s Super Swoop is something you’d have seen in Batman movies. Get this. Crow’s specialty is his 14 daggers thrown from the air, each of which scatters themselves around a specific radius. Upon landing, Crow then throws 14 more daggers.

His gadgets like Defense Booster and Slowing Toxin can produce a complete clean sweep of enemies. To round it all up, Crow’s Carrion Crow and Extra Toxic Star Powers can snuff out the already-poisoned enemies with ease.

Don’t hesitate to use Crow in Showdown, Brawl Ball, Bounty, Lone Star, and Knockout modes of Brawl Stars. This otherworldly assassin delivers all the time.

Here are a few more Brawlers you can consider, given their abilities and ammunition:

In this article, we walked you through the best brawlers to use in Brawl Stars. All the seven Brawlers on our list are equally good, with ammunition that allows them to up their performance by several notches.

Amber, Colonel Ruffs, Byron, Griff, Belle, Edgar, and Crow are amazing Brawlers, and you cannot go wrong when using them. Their abilities are unlike any other.

Poco, Surge, and Dynamike are also strong Brawlers, with cool ammunition ranges you can make the most of.

You can’t do much with a one-size-fits-all Brawler. Have a team of Brawlers who can execute different parts of your gaming strategy.