Infinity Kingdom is a strategy specializing game with cartoon graphics available for iOS and Android since January 2021. The game requires the players to fight for the land of Norheim. The land is at the threat of evil gnomes. The defenders need to protect themselves and the land from other invading players.

How cool is that? But since you are here, we assume that you aren’t quite familiar with this arcade. Compared to other strategy games, Infinity Kingdom stands far apart from the player perspective of monetization. How is that possible? You’ll know in a while.

What’s great is that you can play Infinity Kingdom on your PC, so give it a shot.

Infinity Kingdom is a simple, easy-to-understand, and straightforward game. The gameplay part of it is not so complex to start with.

The immortals are similar to commanders of Rise of Kingdoms. They enable you to assemble a team of armies with troops. These immortals can be categorized into three different types. The various attributes of these types make Infinity Kingdom a strategy-based kingdom.

The lords of Infinity Kingdom need to align the army’s position, element type, and the type of troop to battle with their enemies. Multiple teams can combat against the enemies in battles. You can create the troops according to the spearmen, shieldmen, bowmen, or cavalry.

Lords can also be broadly categorized into various types. All these elements have differing strengths and counter systems.

The immortals and the lords are connected to powerful beasts known as Dragons of the Infinity Kingdom. Lords can train a baby dragon element-specifically and bring them up to their elder stage. The dragons learn new skills and power up themselves over time and turn into a formidable force.

As such, they pose as ultimate sources for immortal teams. Evolving the dragons will let loose their full force and enhance the combating spirits.

The Infinity Kingdom world map is a pretty easy-to-understand map to explore the various ruins despite the fog. However, to move ahead in the game, you should level up your lord level. You can level up your Lord’s grade by completing daily objectives.

Various daily objectives would pose as tasks that will help you achieve higher levels in the game. You will find various objectives such as gathering resources, farming gnomes, upgrading equipment in the Alchemy Lab, or exploring ruins.

You’d also find several resources, gems, and special items in the Infinity Kingdom gift code guide. It is because of these features players enjoy this free-to-play player-friendly game.

Completing daily objectives, participating in events, and top alliances will invite better opportunities for you in the game to level you up. The free-to-play player makes the game even easier to play.

Immortals have excellent animations, VFX, backstory, and voice acting. These effects make them appealing. The characters of the game are mostly similar to those of Rise of Kingdoms. However, the Rise of Kingdom is historical warfare.

On the contrary, Infinity Kingdom includes Dragons and Wizards, Merlin to top up them with a cherry, and is a strategy-based game. Nevertheless, they still have more than a minimum of similarities. However, Infinity Kingdom highlights more of the strengths of its characters by focusing more on the RPG layer.

Once you summon an Immortal, you have the option to spend more shards. Additionally, you can grade yourself up via experiences and improving your gameplay by collecting rune pieces.

You can also equip your Immortal with upgradeable gears. The representation of each of the Immortals is quite cartoonish, possessing different animations and voices. Similar graphics appear throughout the game, and you will have a pleasant experience playing the game.

You can partake in two types of battles in Infinity Kingdom. It is an automated process with you attacking gnomes or cities of competing players. The army marches out, and you get to know the winner of the battle.

Battling in the Well of Time portrays the game at the ground level, and you can watch your resources fight your enemies. You get to use the special powers of the immortals by simply clicking on their portraits in the game.

Another strategy to use in your gameplay in Infinity Kingdom is using your talent and developing skills. If you are the Lord, you can gain talent points to use it while developing your city.

Alternatively, you can invest your talent points in your troops to upgrade their combat strength. It will enhance the powers of the Immortals to fight better.

Additionally, the Tower of Knowledge allows you to encounter various passive skills and select the ideal to invest your Immortals’ soul crystals. That helps in fighting the battles to a great extent.

Developing the city brings responsibility to the game. You take over the castle’s reign and will monitor its regular operations. These operations would include upgrading buildings, putting up new structures, and training troops.

When you upgrade your castle, you will be eligible for new buildings that you can use in the game. These buildings include the Alchemy Lab, the Forge, or the Alliance Center. The castle is the city’s heart. As the Lord, you should protect the city from all attackers in every possible way.

You can achieve such an upgrade by fortifying at the Wall consistently and training the army troops to defend the city. Additionally, you can construct resource production buildings such as farms, smelteries, lumber mills, and quarries. It helps in the passive generation of resources.

Once you reach a certain level, you gain access to higher levels of technology and troops. Also, you can perform with advanced features that are unavailable to lower classes of Lords like in our Infinity Kingdoms Tier List. You get to build once at a time. However, you get to unlock a permanent second builder via in-game purchases.

So, have you made up your mind about Infinity Kingdom? A free-to-play mobile RTS game with additional freebies and no necessity of paying is a dream for all-time gamers. Infinity Kingdom is one of the top-rated strategy-based games.

Moreover, the gift codes every week allow you to win 100-200 gems with powerful gifts. The gameplay of Infinity Kingdom is straightforward. Therefore, if you are looking for a casual game based on strategy, you will surely enjoy Infinity Kingdom.

It is still new to the market and has already gained great popularity among mobile game players. What’s not to like? The game is all about Dragons, buildings, talents, skills, developing building and strategies, and so much more. If you are a new player our infinity Kingdoms beginner guide will help you a lot. 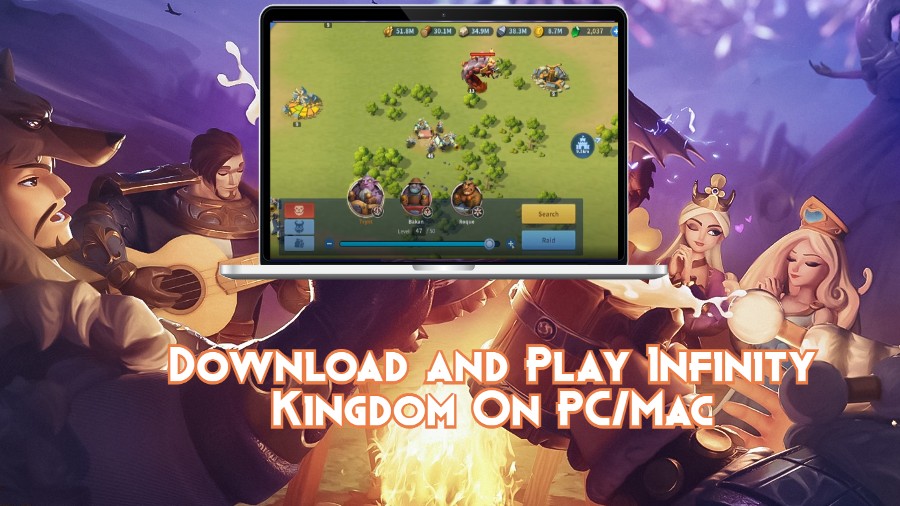